How Lum was Born 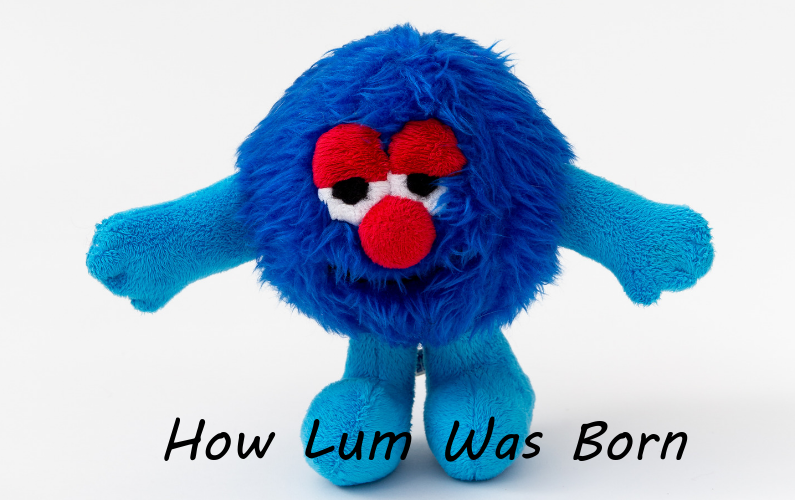 A frequently asked question by both children and adults is “What inspired you to write Lum?” It is possible that I have given more than one answer to this question, dependent on how much time I had to explain, the age of my audience or even my energy levels when I was asked. Each version was absolutely true, but put them all together and you have the whole picture. Read on to find out more.

It all began one evening when my children, age 5 and 8, had gone upstairs to the bathroom to clean their teeth. As normally happened the opportunity to play instead of washing was too great a temptation and before long I could hear gales of giggles. On many occasions, I would call up the stairs to remind them to clean their teeth. Sometimes, I would charge upstairs myself to watch over them. On this particular evening, I started stomping up the stairs with the intention of telling them off. Somewhere between steps one and six, I had the idea that making them laugh might get them to do what I wanted without any upset. On step 7 I chanted: “Fee Fi Fo Fum” and waited milliseconds for inspiration which came as “Here comes a hungry Mum”, quickly followed by “If there’s any children not doing what they’re told, Mum would eat them before they’re old!” Both children giggled … and then cleaned their teeth. I’ll call that success!

I felt that the rhyme, which had rolled off my tongue, deserved a little more life. Change Mum to Lum, and make him a monster. I fell asleep that night with Lum on my mind and woke in the early hours with a full story. Despite it being the middle of the night, I went straight downstairs to write Lum‘s story before I forgot it.

Originally, in my mind, the children in the story were going to find Lum and chase him away. He was still a monster at that point. However, literally as I wrote, the story evolved and I knew Lum had to be given a second chance. That was when the children asked Lum why he was bullying them and they gave him the opportunity to make friends.

I had written quite a few stories which had gone no further than the notebooks they were written in. However, Lum felt like a story I would read in an actual book and I was determined to do my best to make it happen. I typed the manuscript, which seems far too grand a word for a children’s picture book, and submitted it to a number of publishers. As I was to learn, not every publisher responds to unsolicited manuscripts, instead they have a standard policy of “if you don’t hear within 6 weeks, we are not interested”. I did get some lovely, polite, encouraging responses advising that my story did not fit within their portfolio. At about this time I heard of the growing popularity of self-publishing and started researching this route. Although there are additional initial costs with self-publishing, it would appear that traditional publishers do not invest marketing spend in unknown authors. So unless you are already famous, the marketing of new books is down to the author. Exactly the same for self-published authors. With this in mind, I decided to self-publish.

The next thing to do , therefore, was to have the story illustrated. Unfortunately, illustrators charge more than I could afford. It is right that illustrators charge their worth. After all creating artwork is a time-consuming and skilled job. Fortunately, I was married to a man who could draw. There followed a long period where I persuaded and cajoled my husband into illustrating my story. He finally agreed to do the artwork, and I waited patiently for nearly 2 years for him to produce pictures. It was a time-consuming endeavour which involved drawing by hand in pencil, painting in watercolours and outlining in black marker pen.

Finally, all the pictures were ready and I need to overcome the hurdle of learning how to use Adobe InDesign to layout the picture book in a format ready to print. For the first print run, I used a service from Ingram Spark, but all-in-all found it too difficult and chose to self-publish through Matador for the second edition of Lum and my second book Lum’s Mum. Having an expert on board was well worth the additional cost, as the books are now visually stunning too.

Somewhere along the way, I created a couple of cuddly toy Lums to take along to school visits. The cuddlies proved very popular but of course home-made toys cannot be sold for safety reasons, so it was time to find a professional. I had a few criteria for my toys: I wanted the toys made in the UK; for them to be safe for all ages; and at a price that was affordable. Luckily for me I found a small family-run toy manufacturer in the UK, who were able to take the two-dimensional drawings and develop them into three-dimensional toys.

I hope you’ve enjoyed finding out about how Lum was born. Come back to hear inspiration for further stories in future blogs. In the meantime, you can buy Lum and Lum’s Mum books and toys here.